What HR Leaders And Teams Need To Know About Inflation, Recession, The Economy, And The Workforce

The Josh Bersin Company
What HR Leaders And Teams Need To Know About Inflation, Recession, The Economy, And The Workforce

It has been a crazy year so far, as inflation and recession worries abound. In this podcast I will try to demystify what's going on and give you what I believe is your mandate as an HR leader or HR professional in the mess of information coming your way. Additional Information It Doesn't Look Like A Recession To Me Be Careful With The Layoffs How Do You Build an Irresistible Company? Here’s how Starbucks, Walmart, Microsoft, Lego Group, L’Oreal, Chevron, and Cedars Sinai thrive. How Work Design And Job Design Are Holding Companies Back Unleashing Human Potential: The Real Secret To Business Success
View Full Transcript Too Many Jobs, Not Enough People. Why Is The Workforce Changing So Fast?

In this podcast, I discuss the biggest talent issue of the year: the tremendous need for people. As the unemployment rate plummets and it becomes harder to hire, we have to ask ourselves “why... ... 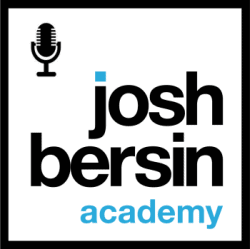 It's August and we've learned a lot about the Pandemic. The four big lessons and how to prepare for Fall and Winter. ...

Is Remote Work Becoming A Fad? It's Working, But More Complicated Than You Think.

Remote Work or Work at Home (WAH) is the new craze. Will this really be the permanent new way of work? Not quite. But it's working well. ...